I finally had the energy to finish the shades I wanted to put up in our guest room/my office. There are tons of how-to's online, but I first saw this post on apartment therapy. I looked at several other tutorials as well, but I didn't follow any particular one; after seeing the general idea, I felt it was pretty straightforward.

First I chose my fabric. There are pretty slim pickings around here in terms of fabric stores (as far as I know, there's only Wal-Mart unless we drive to Columbus), but I liked this ticking stripe, so I went with it. I also bought the cheapest mini-blinds I could find; they were $14, which was and more than I had anticipated (I think the other how-to's all did smaller windows - they quoted between $3 and $5) but still not too bad for a window covering.

In addition to an iron, ironing board, and mini-blinds, here are the supplies I used (I hear that Fabri-Tac is supposed to be one of the best fabric glues, but it's a bit more expensive, and Wal-Mart was sold out of it anyway. I used this brand, and it has worked really well, too): 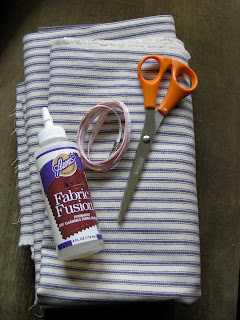 To start making the shades I let the blinds out all the way, put them on the floor, and carefully cut off the louver ladders (but not the pull strings, which is important). 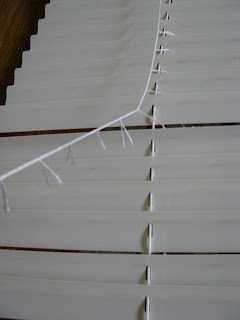 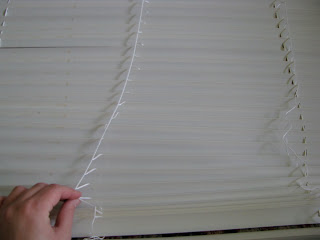 I then pulled all of the louvers off and left only the headrail with pull strings attached. 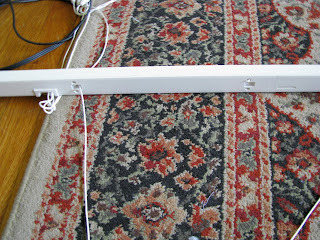 I then ironed my fabric and laid it on the floor to cut the right size. I allowed several inches on both sides as well as at the top, and I folded over the rough edges, ironed the fabric in place, and glued it down. 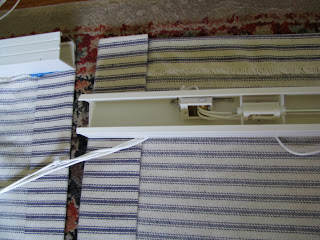 Once I had the sides and top done, I glued the top rail of the blinds to the fabric. 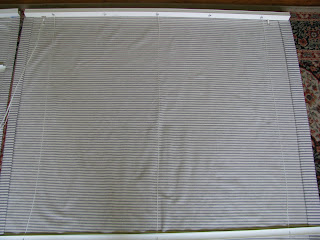 I measured about how long I wanted each fold in the shade, and it came to roughly ten inches. I put four louvers back on the pull strings and spread them out evenly. 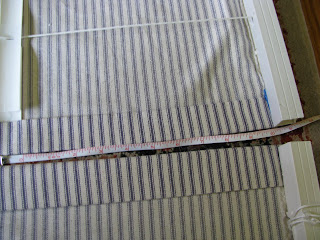 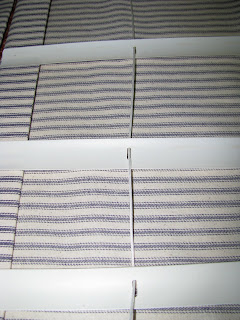 I positioned the rounded part of the louvers on the fabric side so that there was more surface area for the glue to stick to. I then glued each louver in place and tucked the edges into the side folds. The first time I did this, I glued the pull string in place along with the louver, but this doesn't work. The string then stuck to everything and had a hard time opening, so I ended up having to re-do that shade. This time, I kept the glue about an inch away on either side of the place where the pull string intersected the louvers. 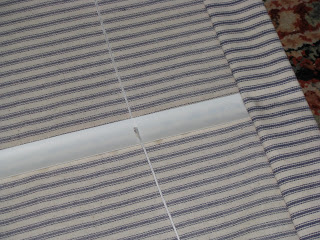 My fabric ended up being shorter than my window, so I had to add a little bit more to the bottom of each shade. I folded over the added fabric, just like before, in order to hide the rough edge, and I glued a louver over the top so that when the sun shines through the window, all the louvers look evenly spaced, and the overlap is less visible. 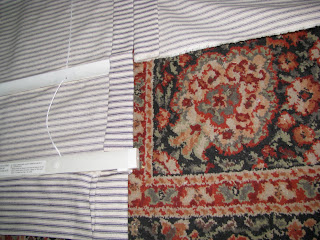 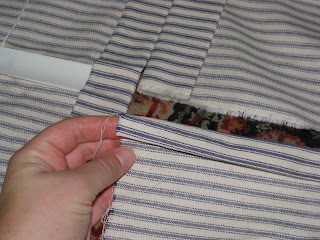 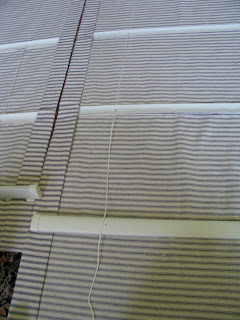 Then I tied the bottom rail onto the pull strings, and I folded over the fabric at the bottom, leaving a larger overlap (I like the way this hangs when the shade is pulled up). Then I glued it all in place and let it dry. 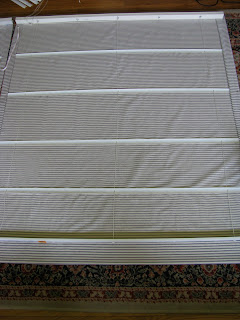 The problem I ran into with the blinds I bought is that the pull string is attached to the under side of the headrail/valance. Covering the blinds with fabric then hid the pull strings and made it awkward when I tried to open the shades. I solved the problem by cutting a small hole in the fabric to let the strings through, and then by covering the top and sides of that hole with a small patch of fabric I glued in place. I was thinking of making a valance, but I didn't want it to look super formal. There is likely a better way to do this, but I don't mind how it turned out. And it's so much easier to use! 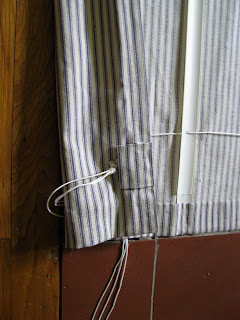 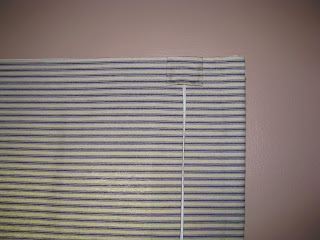 Here's how they turned out: 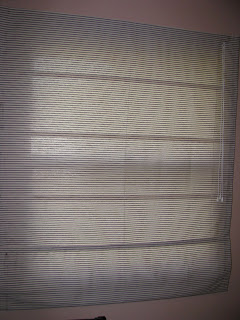 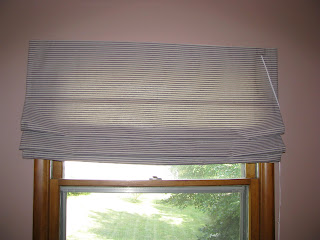 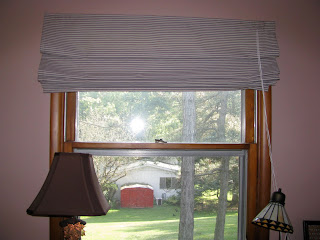 If I do it again, I would consider mounting the brackets much higher above the windows in order to not block as much light (and also make the windows look bigger). But for the window above my desk, I actually found that I like having a little bit of the sun blocked so that I don't strain my eyes.

Anyhow, I am very pleased with them, and I would definitely recommend this. Other than it taking a little bit of time, it was pretty easy, too.