The past two nights have brought pretty amazing storms. During both nights the thunder and lightning went on for hours and rattled our windows almost the entire time. I think last night was perhaps worse; the thunder rattled our windows and shook our walls, and for quite a while there I couldn't even count between thunderclaps and lightning. It sounded like it was right outside, and at one point the crack of the thunder made me think a tree outside had caught fire. It was just amazingly loud. I took these videos from inside, so the sound is a little muffled, but at least you can see and hear how incessant the thunder and lightning were. This first video is from our bedroom window.


In this second video the storm was a little farther away, but you can see how the lightning lit up the whole sky. This is from our living room window.

On a side note, the first night of storms Nora woke me up, and I thought she had to go to the bathroom, so I let her out. She jumped onto the patio and then turned around with this hilarious expression on her face. I give her a voice in my mind, and here she clearly said, "You want me to do what? Oh hell no!" Since I wouldn't let her in until she went to the bathroom, she finally hopped onto the grass but picked up her paws just so, letting me know that she was not happy about getting wet. She reminded me of the monkeys on Planet Earth.

Anyhow, both nights I heard her rummaging around in our bedroom, and when I turned a light on, I saw that she was pulling out my shoes, one by one, from the closet - that little stinker! My first thought was that she was getting even with me for forcing her go outside (In my mind she was thinking, "You wanna make me get wet? Now this is gonna happen!"). Even after we scolded her, she went right back to the closet. This happened at least five times the first night. And last night I caught her again. 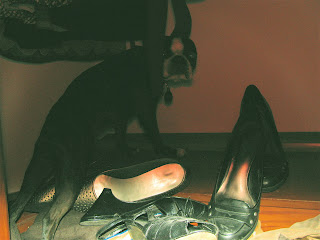 I finally figured out that she was looking for a place sheltered from the windows. Since our bed is right by them, and since her kennel is out in the garage, I think she was looking for small, safe spot. So I went and got her favorite blanket, and she ran right in and stayed there until the morning. She looked pretty hilarious in there, but at least she was finally happy and able to sleep. 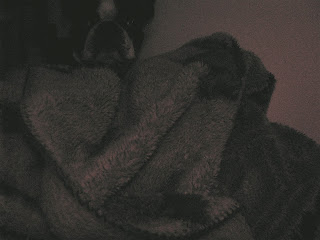 Now she's curled up on the couch snoring away. 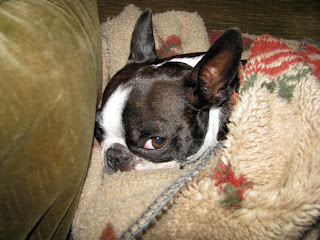 We're supposed to have more storms coming soon, but I'm keeping my fingers crossed that they come during the day. :)