An Unexpected Lesson in Local Fruit

Yesterday Rick and I got away to Columbus for a bit and sat at a coffee shop in an area called Clintonville. I had never been there before, but the area was so quaint, and I'd love to go back and explore a bit more.

We parked in a neighborhood behind the coffee shop, and on our walk down the block we came across this tree that stopped me - I loved the vibrant and varied color of the berries! 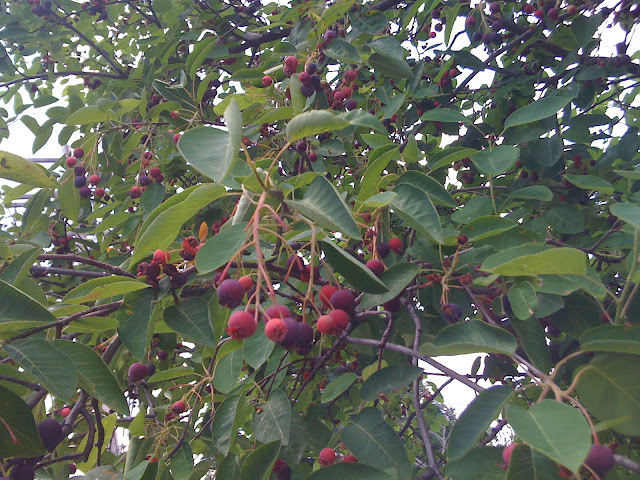 So I paused to take a picture of them while Rick walked ahead with Nora, and I really wish that I had the words to describe how hilarious to me was the thing that happened next. This guy came out of his house, or office? (the three was on the street in front of his building), and he said quickly, "You know you can eat these." And then he pulled off handfuls of berries at a time and popped them in his mouth; he continued to do this while he talked to me. He told me things like, "They taste kind of like blueberries," and, "I just discovered last year that these are edible." Then his friend, or dad?, came out, too, and told me the berries were poisonous (joking, of course), and then told me that the berries are called juneberries but that since this has been such a warm year, they are here early, not in June. The friend/dad told me that he was watching me take pictures of the berries, and he thought, "Now this is a twenty-first century woman, who takes pictures of the berries rather than eats them!" He laughed, "People years ago never would have thought of this; they would have just eaten them." I said that I was not in the habit of just trying various berries because I thought they had the potential of being poisonous (Is this rational? haha. I think it is...). This whole time both of them were pulling off handfuls of fruit and telling me how good it was, so after feeling pretty reluctant, I tried some berries for myself. They were quite good and really tasted almost identical to blueberries, but they had more pronounced seeds inside, kind of like blackberries. 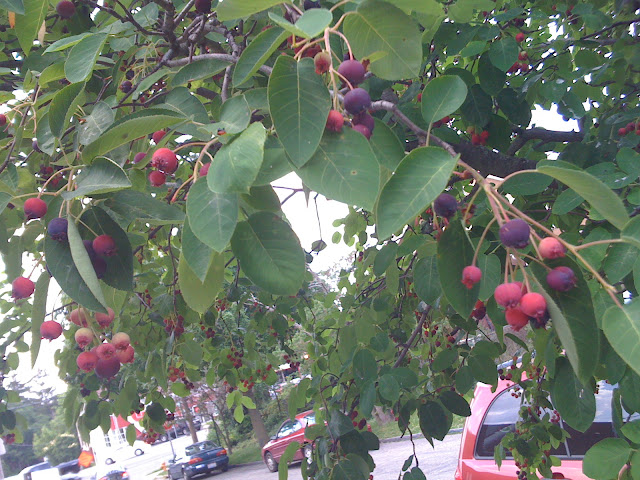 The two then told me about another local fruit called a pawpaw (below), which they said had a fibrous, banana-like custard filling inside a palm-sized fruit. They said that since they are a delicate fruit, I couldn't find them in stores, but I might be able to find them at a local farmer's market. (On a side note, I looked up this fruit online, and I discovered that in September Ohio has a pawpaw festival - I should have guessed - so perhaps I can convince Rick to take me for my birthday...) 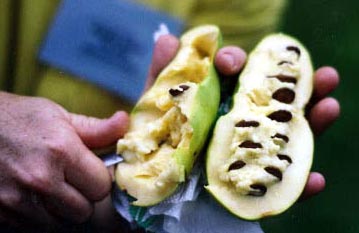 I felt like I happened upon such a wealth of local fruit knowledge, and what a random encounter! Like I said, I can't really capture in words what characters these two seemed to me, but they were so friendly and happy to share their knowledge that I felt like I should offer something in return. I told them that I loved learning about the local fruits and that we were from California, and we used to have a loquat tree in our front yard. They had never heard of that fruit before, so I told them a little about it, and they said they'll look forward to searching for it sometime. :)