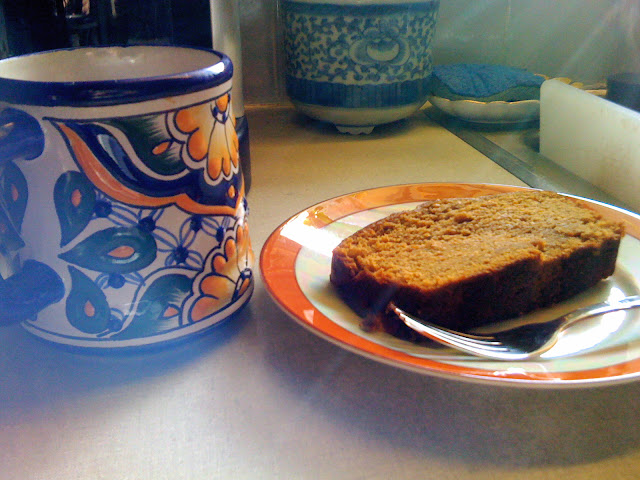 I really have only one recipe I can claim to have "developed" on my own: my favorite pumpkin bread. When I first started making it, I loved it because the bread was never dry, maybe more like eating a torte than a cake. I could never figure out why other pumpkin bread was so different until I made it with my sister-in-law Diane, and she noticed the recipe called for a 16 oz. can of pumpkin, and I had been using a 32 oz. can all along. It's worth it (I also adjusted the spices - I'm kind of partial to cinnamon). So because of its density, I'm going to call it Pumpkin Cake-Bread.

1. Preheat oven to 350 degrees
2. Grease two bread pans (9x5x3") - I rub butter on them and then tap around the combined dry ingredients instead of simply flour - it makes for a pretty tasty crust, I think; it had a kind of crunch to it
3. In a medium bowl, beat sugar and oil, then mix in pumpkin and eggs
4. Sift flour, cinnamon, cloves, nutmeg, baking soda, salt, and baking powder into another bowl, then stir into pumpkin mixture
5. Once well combined, pour evenly into two bread pans and bake for 1 hour, 10 minutes.* Let cool 10 minutes, then transfer to cooling rack.

* I always keep a close eye on it while baking since I am particular about not having dry bread - our oven took a little more time, maybe 5 minutes longer, and I always pull it out when there is still a little bit of batter on the toothpick when I check it. Since it's a dense bread, the undercooking doesn't make it super doughy. If the tops start to look a little browned, I put foil on them. Also, I think the bread tastes better when fully cooled. Something about the heat and the pumpkin flavor tastes strange to me, so I'd recommend waiting to eat it until it has cooled at least an hour, maybe more. 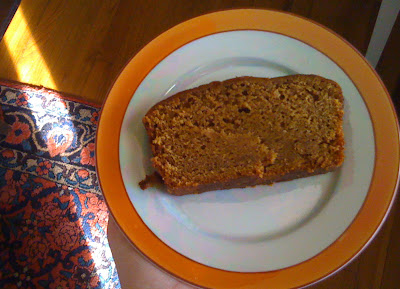 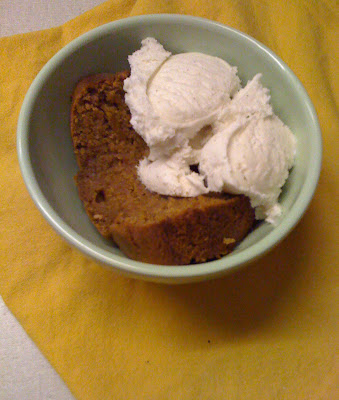